During the first weekend of October, 1999, I represented Canada and competed in the 12th Annual Weltmeisterschaft (World Championship) of schutzhund. The 1999 Bundesseigerprufung (German Championship) and the Weltmisterschaft celebrated the 100th anniversary of the German Shepherd Club (SV) of Germany. It was something special to compete, in Germany, at a high level, this year. How was I able to qualify for the Canadian team when I live and train in New England, and belong to a local club? The answer is quite simple. I am a Canadian citizen ,U.S. resident, and I own a home in Canada, and that I belong and train during the summer months with the East Coast Schutzhund Club of Halifax, Nova Scotia, Canada.

I qualified, with my dog Condor, for the Canadian team by obtaining a qualifying score at a Canadian trial away from my home club, winning the Atlantic regional Championship and placing fourth at the Canadian National Championship, in the heat of late July, in Toronto. Condor is a good , not excellent competition dog, with his share of holes in his training background. Nonetheless, he is twenty times SchH III, received 96 points in his FH, at 14 months, and this year qualified to compete in the World Championship.

I really didn't do anything different in preparation for the championship. In fact, I actually did less as my work schedule is always intense during the month of September. I have been working with Mike Pinksten from Olympia Kennels over the last several years, and Mike has been instrumental in helping me attain a higher level of competition. I did travel to Germany several days in advance of the championship to train with my good friend Dieter Haupt, of Lindenhalle Kennels, to get some German dirt tracking and to improve and calm Condor's less than perfect grip.

Well my flight and connections from Bangor through Boston and Brussels and onto Hanover, Germany were typically late and frustrating. The trip to Germany with a dog is stressful and tiring and I advise anybody planning such an adventure to expect the worst. This was my second trip to Germany with Condor, and I have flown with him on several other occasions. We survived the trip in spite of the luggage handlers' strike in Brussels where all the luggage, including dogs, had to be unloaded and reloaded by administrative staff in office suits.

Dieter met me at the Hanover airport and after coffee we proceeded immediately to some light training, 5-6 hours of tracking, obedience and bite building. It is always my pleasure to work with Dieter as we have become close friends, but I know not to expect to sleep until very late the day of my arrival, usually some 36 hours after my last sleep. Training continued on at several clubs in Dieter's region over the next several days. My experience is that the weather can change several times a day, in Germany, and can be different again within a very short distance. In general, there were several training sessions and several sun, rain and wind sessions each day. For Dieter, the amount of work we did was conservative. He has worked with nearly 25 different dogs and handlers in top world competition and he knows that one week before the competition too little training is better than too much training.

On Wednesday October 27,1999 we traveled to Baunatal, a suburb of Kassel. This is the city where Dieter and Bernard Mannel trained together daily for more than 10 years and entertained “green horns” like Helmut Raiser and Gottfried Dildei. Dieter was immediately presented with a VIP pass on entering the stadium grounds, and I joined the Canadian team. A small problem arose in that the Canadian team was scheduled to practice on the field on Tuesday when only half of the team was there. Dieter, however, came to the rescue, pulled a few strings, and managed to get the rest of the Canadian team on the field, Wednesday afternoon for two 5-minute training sessions. It had been raining steady for 2 days now.

The draw took place on Wednesday night. The SV sponsored a dinner at the town hall for all 140 participants and guests. This included a team march-in, without dogs, supper, a floor show with show girls, several introductory speeches and finally the draw. I drew obedience and protection at midday on Thursday and tracking Friday morning. It would be all over very quickly. The Canadian host hotel was about one hours drive, into the country, from Baunatal. When I finally arrived about 10:30 PM I was informed that my reservation was not available until the next night. This turned out to be a bit of a problem since I was scheduled to compete the next day. My teammate, J.C. Champagne, whose draw was similar to mine offered me shelter. J.C. had booked a double room, but instead of getting two double beds he got two single beds. He put the two beds together and the sleeping space was being shared by his girlfriend and cousin , John. I could join them, but I would have to follow protocol and sleep in an alternate direction. I declined and found a room in a nearby town about midnight. Thursday it continued to rain. I entered the field for my obedience, through an intimidating tunnel, about 1 PM. I thought I was doing a pretty good job in front of the small crowd of 10,000 people and was not too nervous. Well I forgot the sit in the heeling pattern which set the stage for missing the sit-in-motion exercise. I guess it was just another indication of the way things were going when the wooden blind I was standing in for the long down exercise blew down. I dared not move as I feared Condor might break the long down. He didn't. I'm sure I'm the only participant at the championship who did the long down exercise without a blind. After all that we scored 87 points in obedience.

The protection routine was started by heeling up the track on the side of the field, off leash and standing in blind number one while the previous team was receiving their critique. Upon signal I moved to the middle of the field, but because of the standing in the blind and receiving the signal from the judge, Condor was in full courage test mode, not blind search mode. Once I got him turned towards the first blind he did a fairly good blind search. Condor worked through the front half under slightly less than full control, and with a few bumps in the hold and bark. His grips were full and calm. In fact, too calm for outing on the first command which cost us many points. I had never seen the courage test performed as demonstrated. The handler was supposed to kneel on one knee and hold the collar. The dog was to be released when the helper turned up field. The helper did little more than a jog up field until the last 10 yards where he accelerated into the dog with a loud scream. At the last moment he would make a quick step to the side. Over 4 days I only saw one dog taken to stick side on the long bite. This dog must have really pressed the back half helper to the stick side. The quick maneuver before engagement on the long bite fooled some dogs; a few missed completely, others got poor bites. Condor had a strong courage test, too strong for a reasonable out. By now I was really worried about the "outs," but he managed with consistently slow releases until the end. Condor ended up with 80 points. Twelve points were lost on "outs"! At this level of competition the judge takes every point he can and you get the bottom line. There were several scores of 76, 77 and 78 in protection. Several of these competitors left the field in tears. Keep in mind that all of the teams had gone through a rigorous qualification process and most teams had prepared many hours for the Weltmisterschaft; failure by a few points must have been a terrible disappointment. It was almost unbelievable to see the Belgian, German , Japanese and Danish teams "V" the protection.

Condor tracked early Friday morning in the wind, rain, mud, and dirt. The tracks were 600-700 paces and very close together. The first leg of Condor's track was downwind less than 10 feet from the previous dog track which had been run only a few minutes before. He was bothered by it continuously after the first article and he visited it twice for a large point deduction. I was advised to protest the track but took my 86 points and said thank you and ended the risk of failing my first appearance at the World Championship. Tracking scores ranged from 0 to 100 points.

Condor placed 99th out of 135 dogs. He was obviously not competitive with the top German Shepherd dogs, but he could do better - much better, but that is the sport of schutzhund.

I was finished by midmorning Friday. It continued to rain through until Sunday afternoon. In spite of the rain the stadium filled to almost 30,000 spectators on Saturday and Sunday. The vending area was very large and the refreshment tent was well utilized. Beer and coke sold for 3.00 DM and coffee 3.50 DM. I met many old dog friends from the U.S., Canada, Germany, and Belgium, some from more than 20 years ago. Dieter introduced me to many of the German Shepherd elite of Germany: breeders, trainers, competitors, judges, etc. Several times we visited the SV - VIP tent. The whole event was impressive, but the most memorable piece had to be the closing ceremony. To march on with the top 135 German Shepherd teams in the world is something to experience. This is truly a working shepherd enthusiasts' dream. It cannot be overrated, and is worth every minute of training to obtain. Finally, I cannot thank my supporters enough. I had their financial help, training help, and moral support. I am thankful to the New England Schutzhund Region for providing the arena for schutzhund training and competition. Most of all, I am thankful to my two good friends Dieter Haupt and Mike Pinksten, who moved me from club competition to world competition in a very short time.

The Facts About Board and Train

FAQ's of Board and Train

Pick of the Litter 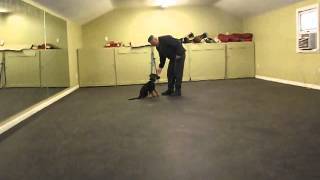 WHAT DOES MY PUP LEARN DURING THE OLYMPIA PUPPY STARTER PROGRAM?

The Best Method of Training